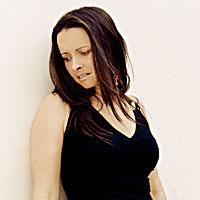 Rebecca Moore is a highly accomplished, award winning singer songwriter and multi-instrumentalist. Her music is described as traversing the plains between Led Zeppelin’s Battle of Evermore and Stevie Nicks’ Gold Dust Woman.

She has supported many great artists including the John Butler Trio, Xavier Rudd, Christine Anu, Archie Roach, Sarah McLeod (The Superjesus) and the Afro Celt Sound System at the Sydney Opera House.

Rebecca has received many nominations and awards for her songwriting including: 4th place in the Songsalive Song Comp 2014, top 10 in the Australian Songwriting Awards Country category 2014, finalist in 3 categories Australian Independent Music Awards 2013, nominated for Australian Songwriters Association Rudy Brandsma Award for Songwriting Excellence 2013, Musicoz World/Folk Award (Top 5) 2012. She is currently #1 Singer/Songwriter in Sydney on Reverbnation.

She has toured the UK three times, including a tour in 2001 as winner of the APRA Professional Development Award in the Rock category.

Driven both by music and a strong social conscience, Rebecca is also co-ordinating a series of concerts, which raise funds and awareness for a group of orphans in Burma, known as the Nargis Children. So far over $20,000 has been donated to these lost children.

Rebecca's new album spans a decade of touring and songwriting. Her original songs combine the beauty of ancient folk music with contemporary vision, the power of rock music, and the blues. The album was recorded with Dave Sparks at Pirate Studios in Tathra, NSW, and Martin Russell of the Afro Celt Sound System in London. It will be launched during Spring/Summer 2014/15.